Yesterday, Rob very kindly printed a few more components for my 3D printer: a stepper motor mounting bracket, the top end idler pulley bracket, an idler pulley and a drive pulley.  The drive and idler pulleys are version 2 components.  I had to modify them to allow for a phenomenon I’m choosing to call squeezage.  This is the behaviour of molten plastic which causes it to extrude slightly sideways when deposited from above, resulting in circular holes being slightly smaller in diameter than expected.  I don’t have a lathe (yet), so I was unable to modify the version 1 pulleys with enough accuracy to make them fit the bearing and shaft.  Here are the new components: 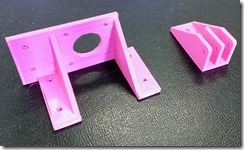 And here are pictures of them all fitted to the printer frame: 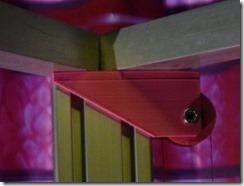 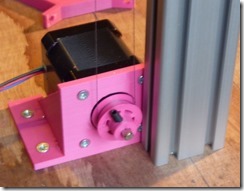 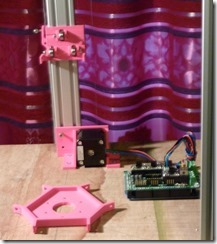 As you have doubtless come to expect, most of the pictures (the ones not taken with a phone) are blurred because of my camera’s focusing fault.  I really must buy a new camera.

This morning I fitted the high-strength fishing line I’m using in place of a drive belt, set the tensioner in place, temporarily wired up the controller board and fired up Pronterface to see if I could make the carriage move up and down.  Astonishingly, everything just worked.  You can see a (rather dull) video of it on YouTube if you really have nothing better to do.  If you can bear to watch right to the end of the video (it’s only a couple of minutes), you’ll get some idea of the size of the printer.  It’s a bit bigger than I originally intended – but if I ever need to print something the size of a traffic cone, I’ll be well set up.

The next step is to do some tests to see how accurate and repeatable the motion is.  When I’m satisfied with that, I’ll fit the other two sets of drive components, and then it will be time to connect up the print head and its support arms.  Watch this space.

“Fuzzy” is a word that should only ever be applied to felt.  Ignoring the colour, can you spot the difference between the two images below?  They are scaled down, but if you click on them you should get a larger version of each. 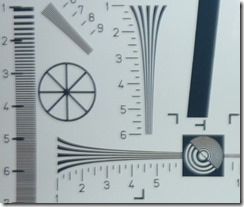 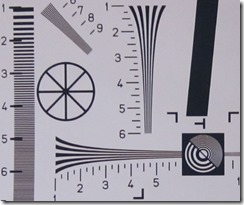 Obviously, the one on the left is out of focus.  Both photos were taken of the same target, at the same distance.  The sharp one one is taken with my wife’s Canon Ixus 105, and the fuzzy one with my Panasonic Lumix TZ7.  For some reason, my camera has decided to stop taking clear photos and has taken it upon itself to do everything in soft focus.  It’s impossible to see this in the (relatively low resolution) viewfinder, but it’s obvious when you look a the full size image.  I’ve tried every setting on the camera, and every factory reset possible.  The lens is clean, and nothing seems to be jammed or problematic.  The thing simply won’t take sharp pictures.  Just to add insult to injury, here’s the same picture taken with my phone camera (using the phone’s built in ‘flash’, which causes the horrible reflection): 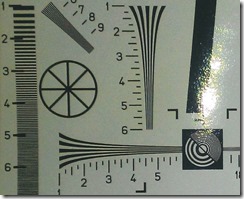 The upshot is that I am no longer able to take pictures with my camera which are good enough to post here.  This is irritating, because I’ve got progress on the printer which is just dying to be documented.  I guess I’ll just have to buy a new camera.